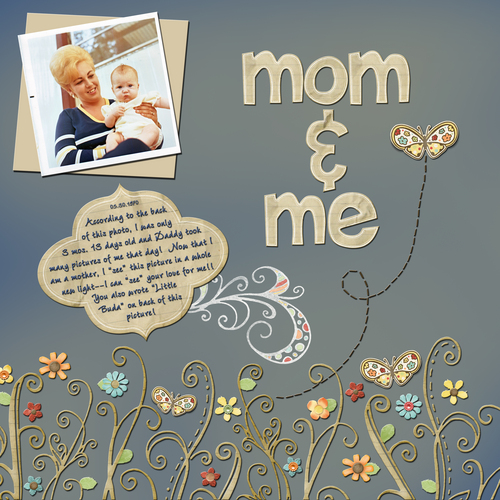 Okay, maybe I've bitten off more than I can chew! I "swiped" my Mom's old photo albums and thought I would make her a scrapbook from our childhood---well, the photos are "stuck" in the 1970's album from H#** and I'm having a hard time with them... but, if I am persistent I just know this will be a GREAT Christmas gift! I'm going to buy "Undo" tomorrow! Please give me feedback--I can't make the pictures larger without distorting the pixels and this is my first ever attempt at making my own background... I used elements from other kits, but the bluish-yellow background is all mine... My main concern is whether or not it is too dark and I'm wondering if it clashes with the photos???????? Please feel free to give me any and all suggestions!

You must be logged in to leave a comment.
BeachScraper, at 04:51PM on Tuesday May 27, 2008
I think these are very nice, I wouldn't worry too much about the size, it does symbolize that time period and that is something special in it's own way. I like the background color. You can do this!!! i recently removed over 2000 pictures from the early seventies and on...I won't say it wasn't easy, Good Luck. It will be a GREAT present.
audosborne, at 05:24PM on Tuesday May 27, 2008
I think you've done a great job..I like the background color also. Your pictures are so clear and pretty. I have a lot of old photos from the 50's, 60's& 70's. My problem is that many of them are faded and there is no focus on the faces. I don't know how to fix that. I didn't realize I was messing up the pixels by enlarging them but obviously I am. What is "undo". Gosh, Beachscrapper 2000 pictures!!!!
Jesse77, at 06:50AM on Thursday May 29, 2008
I think it is perfect, and I love the background you created, it goes really nice. I think the pictures look really nice smaller, I would keep the LO just the way you have them. I have thought about trying out photo shop,to try and make my own elements/papers..... but I am not sure which one to buy- I saw photo shop elements at Costco the other day for $80.00. What version do you use? Again great job!!!!
marjohn, at 07:41AM on Friday May 30, 2008
Thanks so much for the wonderful comments... Beach--2000??????? Kudos to you! I've only done 127 and I'm already pooped!! Audo--"undo" is a glue remover (& a LIFESAVER!) Jesse--I am using Photoshop CS3, however, rather than spend all that money, you might want to look at Paint Shop Pro Photo X2. I have that one also and have already seen where it is much more user-friendly and accomplishes many of the same things as CS3...