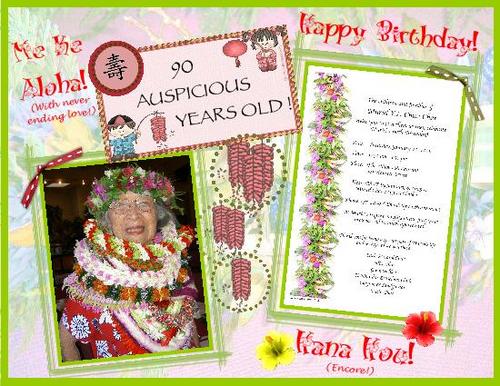 In Hawaii, we like to celebrate milestones and indeed it was one on this occasion! My mother-in-law, Muriel, celebrated her 90th birthday in 2005! She's 93 years old now and she's still the "Energizer Bunny", cooking & making "haku" leis, such as the one she made that was used in the background photo which was enlarged from the lei in the invitation. She's indeed a talented woman! I cropped and enlarged a portion of the haku lei that Muriel made that appears in the invitation. I lightened it using the opacity tool, and used it as the background photo. Using the mat tool, I used the same mats & frames on the pictures. For embellishments, I used ribbons and circles so as not to detract from the background. I used free Chinese and Hawaiian clipart, and fonts I found on the internet to further brighten the design of this page!