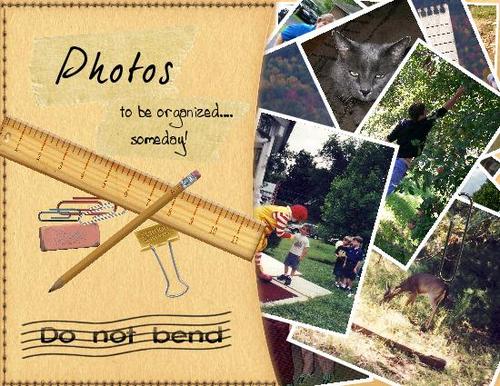 This is pretty close to what my photos files look like. The inspiration came from tnvacation.com. The image pops up briefly, so I took a picture of it. It doesn't look much like the orginal, but you get the idea.

You must be logged in to leave a comment.
BeachScraper, at 03:20PM on Thursday October 30, 2008
This is very good, everyone is coming up with great ideas.How true this is!!!
annirana, at 05:31PM on Thursday October 30, 2008
I saw a LO that a lady did w/ a pink envelope. She made it out of squares and rectangles. It was of her and her husband holdind their new grandbaby. I can't remember her name, but she's somewhere in the page gallery. I like the envelope idea and was toying w/ it, so now that I've seen your LO, I think I will give it a try. I like it!
Jesse77, at 05:04AM on Friday October 31, 2008
so creative!!!!!!The Ronald McDonald pic totally takes me back. I remember when I was 6 I had my birthday party at this Mc Donald's that had a huge train,( they eventually tore it down, but it was very unique)I can remember playing on the playground which was outside and burning my bum going down the slide(Arizona in March!)it was so much fun and of course Ronald showed up! They have such totally different play areas now for kids. They aren't really playgrounds but jungle gyms in side, and seem definitely a lot more safer, then the metal stuff!. I miss the Ronald Statue that use to be outside a lot of the Mc Donald's. Silly things I guess, but stuff I hadn't thought about in a long time!
audosborne, at 01:03PM on Friday October 31, 2008
Thanks ladies and Jesse thanks for sharing that memory. That's what scrapping is all about.
RABIDFOX, at 04:30PM on Saturday November 01, 2008
This is a great inspirational page. I bookmarked it as a favorite. I'll probably have to scraplift this in the future! Thanks for the great idea.