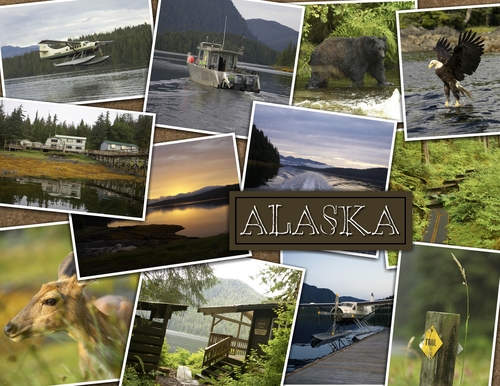 My husband, his 6 brothers, father and our son had a great trip to Alaska. I had the album made into a hardbound book. I can't believe how it turned out. It is really simple in design, but seemed to fit the photos. Here are a few of the layouts.

You must be logged in to leave a comment.
annirana, at 05:04AM on Wednesday August 15, 2007
HEY! I saw this book on QVC just yesterday! They were having like an all day scrapbook show, and when they were talking about MM, they were saying that one of the options for your layouts is to have them made into a hardbound book...and they used YOUR book for the example. That 1st picture was the cover of the book. Did you know that they had done that? How cool! Did they like ask your permission or anything? I have it on my DVR, I'm going to look at it again. What awesome pictures. It looks like they had a GREAT time!
robertaboice, at 05:55AM on Wednesday August 15, 2007
Kerry - Would you be able to tell us what FONT you used - I like it because it looks like you did it by hand! I 'new' to this 'digital scene' and would love to find out where I can get more FONTS for my computer. You did a great job on displaying these pictures. Thanks for sharing - Amelia007
annirana, at 02:27PM on Wednesday August 15, 2007
I don't mean to answer for her, but try www.1001fonts.com, it's free!
alliesun98, at 07:32PM on Saturday August 18, 2007
I love the cover page :) Nice work!